How did I get into building pedals?

From the very first moment that I started playing the guitar, I was seeking for that ultimate guitar tone. This tonequest peaked even more when I got into bands like Incubus and Radiohead. I was amazed by all the different tones they achieved, so I started collecting some pedals and spent days to find the most interesting combinations. Since I could not afford buying all the pedals I wanted, I decided to start making my own.

I think it was around 2004 when I started modifying my first guitar, a Squier affinity strat, which I was not using anymore. The neck was useless anyway, so I thought it would be cool to make it fretless to play some slide. I also redesigned the shape a little to a blend between a strat and a jazzmaster and eventually refinished it. My first soldering attempt was also on this particular guitar, putting a cheap humbucker in the middle position, adding a killswitch and rewiring it to a master volume and single tone control setup.

In 2005 I was playing in a funkrock band, called ‘Underwater Paradise’. My pedalboard was growing bigger and I was tapdancing all the time. I was playing through a Marshall JCM600 at that time, constantly switching between the amp’s channels. (Very underrated amp btw!) Since I only used my modulation and delay pedals on the clean channel, I bought a true bypass looper to put my delay and modulation in a separate loop. The first thing I did was building the footswitch from the amp into this looper so I could switch between wet clean and dry overdrive tones with just one stomp. This was my first ‘pedal mod’ ever.

Only a few days later I ordered a DIY pedal kit from Newtone to build a One knob Muff fuzz, carefully following the instructions. I remember being completely overexcited when I got it working from the first time! Although it was barely used because it sounded pretty awful, I really started to enjoy the stompbox building and modding thing.

In the next months I modded my Boss TR-2 tremolo, built a patchbox for my pedalboard, a Super Hard On clone with a tuner mute, and so on.

Finally I had a big ass pedalboard! (Really had a lotta fun with this one!) 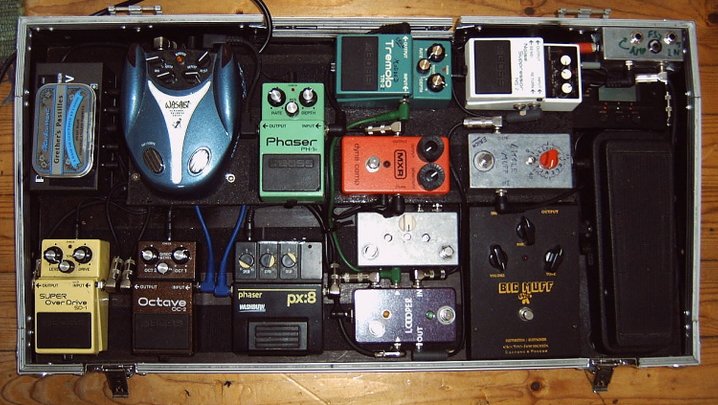 In the years that followed (in between work, travelling, having babies, playing in bands, etc.), I was mainly building clones from some famous pedals, for own use or sometimes for friends on request. I also modded some more pedals and rehoused my Sovtek Green Russian Big Muff (which is something I really regret now, since I ditched the original case…).

Then I began digging a little deeper into the circuits and schematics, trying to understand what’s going on.

It's at that point that I started thinking about the idea behind ‘Sonic Fields’. Definitely a story to be continued!